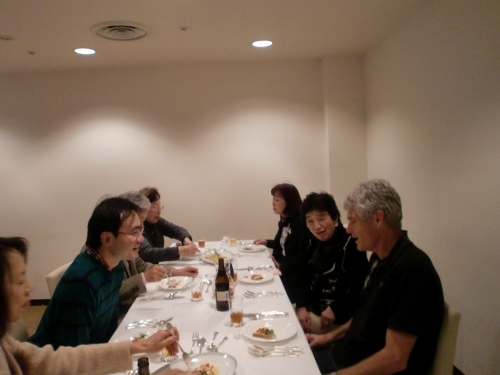 A Room with a View by E. M. Forster

How often had Lucy rehearsed this bow, this interview! But she had never imagined George who would be happy and greet her with the shout of the morning star.
All our carefully planned gestures mean nothing, or mean too much.

Though nothing is perfect, Lucy felt for the moment that her mother and Windy Corner and the Weald in the declining sun were perfect. At the last minute, when the social machine was clogged hopelessly, one member or other of the family poured in a drop of oil. Cecil despised their methods---perhaps rightly. At all events, they were not his own.

The ghosts were returning; they filled Italy, they were even usurping the places she had known as a child. The Sacred Lake would never be the same again, and, on Sunday week, something would even happen to Windy Corner. How would she fight against ghosts? For a moment the visible world faded away, and memories and emotions alone seemed real.

◎Oral Class
Jon先生is going to visit Akita and stay there with his friend on New Year holidays.
He has spent his New Year Holidays in Thailand over these 10 years, so his friends there feel sorry to hear this. But the temperature there is about 9~10℃ and it’s very cold this year , compared with the previous years.

Before discovering minimalism, I did read Marie Kondo’s book and found it helpful in reducing my things. I was the type who could never tidy up even as a grownup, living in a messy apartment well into my 30s.

To help you say goodbye to your things:

The important thing is not the measurement of how many or few things you have, but your own state of mind and how you feel about the things you have and you don’t have. If you have a lot of things and are truly happy, that’s totally fine. If you can be satisfied with just a few things, that’s just as wonderful.

Each material thing has the usefulness of having it around and the inconvenience of having to maintain it. If weigh them both and find that the inconvenience is winning, or if you are just exhausted of chasing after new things all the time, I think that’s the time to start giving decluttering a serious thought.