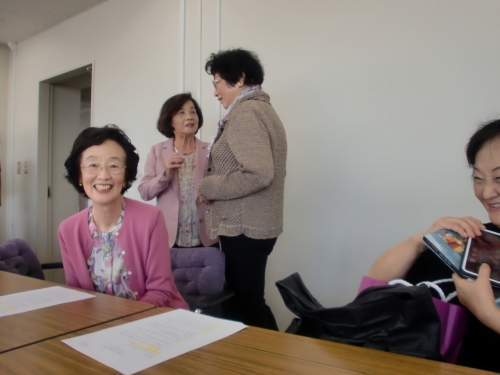 ◎講読クラス
A Room with a View by E.M. Forster
Forsterの次々と繰り出す作家群を見事に解説される久守先生に驚嘆します。

A few days after the engagement was announced Mrs. Honeychurch made Lucy and her Fiasco come to a little garden party in the neighbourhood. The spirit of the generations had smirked through all those old women , rejoicing in the engagement of Cecil and Lucy because it promised the continuance of life on earth

Lucy had stopped where a footpath diverged from the highroad.
“Are there two ways?”
“Perhaps the road is more sensible, as we’re got up smart.”
“I’d rather go through the wood,” said Cecil, with that subdued irritation , and added that
“I had got an idea that you feel more at home with me in a room.”
“When I think of you it’s always as in a room with no view, I fancy.”

Cecil waited for her to make some remark which should show him her inmost thoughts.
At last Lucy spoke, “Emerson the name was, not Harris.”

Lucy’s senses expanded; she felt that there was no one whom she might not get to like, that social barriers were irremovable, doubtless, but not particularly high. She returned with new eyes. For Italy was offering her the most priceless of all possessions---her own soul.

So did Cecil; but Italy had quickened Cecil, not to tolerance, but to irritation.

In the interests of the Comic Muse and of Truth, Cecil would bring them to Windy Corner.

QUIZ
1 What starts with an e and ends with an e , but has only one letter? ENVELOPE
2 What kind of cheese is made backwards? EDAM cheese
3 Why is an island like the letter T? WATER An island is surrounded by water.

What Makes Us Human?

Evolutionary biology and scientific evidence tell us that all humans evolved from apelike ancestors more than 6 million years ago in Africa. Although different branches of humans died out, the branch leading to the modern human, Homo sapiens, continued to evolve.

Humans have much in common with other mammals on Earth in terms of physiology but are most like two other living primate species in terms of genetics and morphology: the chimpanzee and bonobo, but differences are vast.

The human neck grew longer to accommodate the tongue and larynx, and the human mouth grew smaller. The disadvantage of this evolutionary development is that this flexibility comes with an increased risk of food going down the wrong tract and causing choking.

The human shoulder joint has a wide range of motion and is very mobile, affording the potential for great leverage and accuracy in throwing.

Owing to bipedalism, humans travel long distances for food and water. Humans also have an abundance of sweat glands, called eccrine glands. To make these glands more efficient, human bodies had to lose their hair to better dissipate heat.

Apart from our obvious intellectual capabilities that distinguish us as a species, humans have several unique physical, social, biological, and emotional traits.