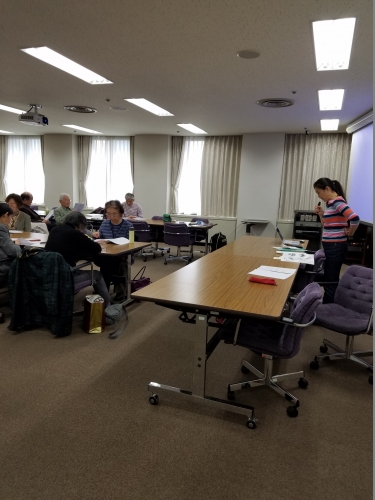 Miss Bartlett did not stop to consider,, for her glance passed on to his clothes. These did not attract her.

"This pension is a failure. Tomorrow we will make a change.” Hardly had she announced this fell decision when she reversed it.

Lucy at once rose to her feet,exclaiming: "Oh, oh! Why, it's Mr.Beebe! Oh, how perfectly lovely! Oh, Charlotte, we must stop now, however bad the rooms are. Oh!“

"He has the merit---if it is one---of saying exactly what he means. He no more thought of putting you under an obligation than he thought of being polite. It is so difficult---at least, I find it difficult---to understand people who speak the truth.”

There was a haze of disapproval in the air, but whether the disapproval was of herself, or of Mr.Beebe, or of the fashionable world at Windy Corner (Lucyの世界), or of the narrow world at Tunbridge Wells (Charlotteの世界), Lucy could not determine. She tried to locate it, but as usual she blundered.

The clergyman, inwardly cursing the female sex, bowed and departed.

Conversation.
Seeing the pictures of flowers such as tulips in Yokohama , taken by Jon 先生, we had fun. After that, we talked about the new era’s name “ 令和“ , such as its Chinese character’s origin, history and its derivation.  We were very enthusiastic.

Text : from “ What Jobs says “ : My second story is about love and loss.

I was lucky---I found what I loved to do early in life.
Woz and I started Apple in my parents’ garage when I was 20. We worked hard, and in 10 years Apple had grown from just the two of us in a garage into a $2 billion company with over 4,000 employees. We had just released our finest creation---the Macintosh---a year earlier, and I had just turned 30. And then I got fired because our Board of Directors’ decision.

I had been rejected, but I still loved what I did. The heaviness of being successful was replaced by the lightness of being a beginner again, less sure about everything. It freed me to enter one of the most creative periods of my life.

During the next five years, I started a company named NeXT, another company named Pixar ( which is now the most successful animation studio in the world ) and fell in love with an amazing woman who would become my wife. In a remarkable turn of events, Apple bought NeXT, I returned to Apple, and the technology we developed at NeXT is at the heart of Apple’s current renaissance. And Laurene and I have a wonderful family together.

If two witches were watching two watches, which witch would watch which watch?

Who edited the magazine?
Ed edited it.

She sells seashells by the seashore.